The Golden Globes is historically known for being a looser, more alcohol-friendly award show — but just because celebrities turned out looking for a good time on Sunday (January 5) doesn’t mean they didn’t also use their platforms for a greater good. Throughout the award show’s three-hour telecast, it was rare when Hollywood’s biggest stars didn’t use their time at the mic to speak truth to power in some way — even host Ricky Gervais, who clearly could not have cared less to do his job, called out heavyweight companies Amazon, Disney, and Apple for their exploitive manufacturing practices.

From the subtle to the direct, winners didn’t hold back. Below, just some of the ways actors and creatives spoke out about the issues they care about:

The creator of the Hulu show Ramy nabbed the first win of the night for Best Actor in a Television Series, Comedy and wasted no time in breaking host Ricky Gervais’s number-one acceptance-speech rule, AKA “Don’t thank God.” (Gervais is a notorious atheist.) He thanked both God and his parents for supporting him in the creation of his show, and people on Twitter quickly picked up the significance of an Arab Muslim man saying “Allahu Akbar” on live TV during one of Hollywood’s biggest nights.

Youssef has been open about how he hopes Ramy helps widen the lens of Arab and Muslim representation on television, a medium in which Hollywood notoriously falls back on xenophobic stereotypes in depicting those communities. “There is this weight that kind of sits on something that comes from someone like me, and there’s an anxiety that comes with that,” Youssef told NPR about the responsibility he feels about helming one of the first shows to help correct and confront American television’s exclusionary past.

When the Parasite director collected the award for Best Foreign-Language Film, he did so with a translator by his side. He delivered his speech mostly in Korean and reminded the audience, “Once you overcome the one-inch tall barrier of subtitles, you will be introduced to so many more amazing films.” Bong’s film was nominated alongside Pedro Almodóvar’s Pain and Glory (which features Spanish-language dialogue), Ladj Ly’s Les Misérables and Céline Sciamma’s Portrait of a Lady on Fire (which are both in French), and Lulu Wang’s The Farewell (which mostly features Mandarin Chinese dialogue).

“I think we use only one language,” Bong added during his speech. “The cinema.”

Just a Reminder: The World Is On Fire

Things might have been bright and cheery inside the Beverly Hilton Hotel in Los Angeles, but plenty of celebrities were quick to remind everyone that things are dire, and the climate crisis is happening now. When Jennifer Aniston accepted Russell Crowe’s award on his behalf, it was because he was home in Australia, trying to help the firefighting efforts.

“We need to act based on science, move our global workforce to renewable energy and respect our planet for the unique and amazing place it is,” the actor, who won for his work in The Loudest Voice, said via a speech he sent in ahead of time. “That way, we all have a future.”

Other celebrities, including Cate Blanchett, Naomi Watts, Pierce Brosnan, and Phoebe Waller-Bridge also highlighted the fires, which have been burning steadily for months and have claimed thousands of homes and dozens of lives. “We’ve hatched an amazing plan with Ralph & Russo, our Australian designers, who made this incredible couture suit which is the most extraordinary thing I’ve ever worn, and we’re going to auction it and the money that is raised from it will go toward relief in Australia,” Waller-Bridge, who won twice for her work on the show Fleabag, told reporters backstage. “I’m really excited to be part of that.”

The Saturday Night Live star paid homage to Ellen DeGeneres, the recipient of this year’s Carol Burnett Award, and in doing so, opened up about what seeing another gay woman on television felt like when she was a child.

DeGeneres famously came out in a two-part episode of her eponymous sitcom, called “The Puppy Episode,” in 1997. At the time, the move was extremely controversial — and cost her a job for many years. But that glimmer of representation meant a lot to plenty of LGBTQ+ people, including McKinnon, who called her experience of self-discovery “a very scary thing to suddenly know about yourself. It’s sort of like doing 23 and Me and discovering that you have alien DNA. And the only thing that made it less scary was seeing Ellen on TV.”

“If I hadn’t seen [Ellen] on TV, I would have thought, ‘I could never be on TV. They don’t let LGBTQ people be on TV,’” McKinnon added. “And more than that, I would have gone on thinking that I was an alien and that I maybe even didn’t have a right to be here. So thank you, Ellen, for giving me a shot at a good life.”

Patricia Arquette Did Not Come To Play

What part of Patricia Arquette’s speech wasn’t political?  The actor, who was honored for her work in The Act with a Best Supporting Actress in a TV Series award, wasted no time in pivoting the conversation away from the perfunctory thank-yous and toward a myriad of pressing issues.

“We will see a country on the brink of war, the United States of America, a president tweeting out a threat of 52 bombs including cultural sites,” she said, referencing President Donald Trump’s threat of committing war crimes. “Young people risking their lives traveling across the world. People not knowing if bombs are gonna drop on their kids’ heads. And the continent of Australia on fire. So while I love my kids so much, I beg of us all to give them a better world. For our kids and their kids, we have to vote in 2020 and we have to beg and plead for everyone we know to vote in 2020.”

During her acceptance speech, the Fosse/Verdon star highlighted the choices people make on the way to earning any accolades they might amass.

“I’m grateful for the acknowledgement of the choices I’ve made and also grateful to have lived at a moment in our society where choice exists, because as women and as girls things can happen to our bodies that are not our choice,” she said. “I’ve tried my very best to live a life of my own making and not just a series of events that happened to me, but one that I could stand back and look at and recognize my handwriting all over it — sometimes messy and scrawling, sometimes careful and precise, but one that I have carved with my own hand.”

She brought the sentiment home by urging women in particular to head to the polls whenever and however often they can. “So women, 18 to 118, when it is time to vote, please do so in your own self-interest. It’s what men have been doing for years, which is why the world looks so much like them,” she said. “Don’t forget we are the largest voting body in this country. Let’s make it look more like us.”

The reality of her sentiment is complicated by a number of factors, including that a number of female legislators have worked to implement anti-choice legislation. In May, Alabama governor Kay Ivey signed a bill that targeted abortion providers and threatened them with life in prison; it has since been blocked by a federal judge. And of the women who vote, white women specifically are the most likely to vote for conservative representatives, while Black voters and Black women voters especially drove much of the progressive wins in the 2018 midterms.

Adding to all of this, voter access is constantly under attack by gerrymandering, disinformation, and other tactics that add up so that many people feel as if their votes aren’t as powerful or important as they actually are. Encouraging people to vote is a crucial component of the fight to preserve individual rights. But in order to do that, we also have to change the laws that disenfranchise voters — and that often requires voting. 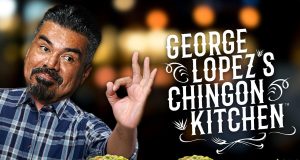 George Lopez is All About the Green with Guacamole Trademark