Complex orchestras were the rage during the 18th century. It would be nearly two centuries before Camila Cabello’s metal-beam melting pop would become the de facto soundtrack to life for anyone with a pulse. Last night (October 12), Cabello gave the Enlightenment Age a taste of spice with her performances of “Cry For Me” and “Easy” on Saturday Night Live. Wearing two beautiful dresses, she contrasted the fashion of then and yesterday. And it’s so much better today. So much better.

Can you imagine walking into a bar on an 80-degree day and have to watch dozens of people sweat under thick layers of clothes? Even on stage, Cabello looks like she’s wearing a dress that could house three people. In the midst of a crowded bar, she sings “Cry For Me” with conviction. Everyone comes together to perform an elaborate ballroom-like routine that looks hot–literally. It’s fun for three minutes, but just thinking about seeing this happen back in the day before house fans were a thing can give you a serious bout of anxiety.

Cabello’s performance of “Easy” was much simpler. She shed the layers for a stunning white dress and stunned the crows with a vibrant performance backed by a powerful guitar. It was everything you can imagine, and more. Most importantly, it wasn’t stuffy.

Check out Cabello’s performances up above. 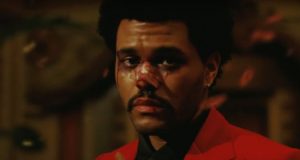 The Weeknd’s ‘Until I Bleed Out’ Finds The Singer Struggling To...