Teen Mom OG‘s Butch was not present at the birth of his granddaughter Vaeda — and Catelynn and Tyler were unsure if the grandfather (who has struggled with addiction his whole life) would spend time with their youngest girl once she arrived. Sadly, one year later, a meeting between grandfather and granddaughter has yet to happen.

During tonight’s episode, Vaeda turned single digits surrounded by family and friends — but sans Butch. Before the milestone, Ty revealed that Butch — who “slipped back into his old ways” after his last treatment stint — was back in Michigan after living in Texas. In fact, before the party, Butch re-established contact with his son, and Tyler contemplated inviting him to the celebration. Tyler contacted the rehab facility Butch attended for some “general feedback” on how to proceed with his dad.

“Letting him come over for a dinner, if he wants to meet his granddaughter, is that enabling him?” Tyler posed during the phone call.

He was given some advice to not enable or engage with his father — even though Tyler said that Butch is not using in front of him.

“But you’re saying just letting him come over, and even if he’s not high at that moment and using, [that’s] considered enabling,” Tyler stated, which the counselor confirmed.

Tyler heeded the advice, and Butch’s stretch of not knowing Vaeda continued.

“There’s no in between; there’s no gray area,” Tyler told Ashley at the bash. “You’re either sober, or you’re not. It’s very simple. He’s not sober, so that’s why my relationship has to be the way it has to be. Anything that requires effort on my part is not happening.”

Will Tyler be able to maintain the boundaries he outlined? Or will he give in to the desire to see Butch and subsequently go back to being the parent in the relationship? And will Butch ever spend time with Vaeda? Keep watching Teen Mom OG on Tuesdays at 8/7c. 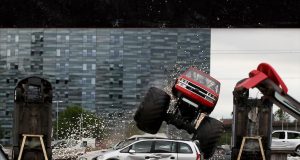