Hailee Steinfeld’s new video for “Wrong Direction” is simple and emotionally scarring. It’s an extreme closeup of her face as she sulks in a tub, destroyed by revelations that her last relationship sucked. The water flows around her as her skin prunes, but she’s oblivious to what’s going on. She’s can’t feel anything except a heavy chest.

Steinfeld’s visual zooms in tight to showcase her unwavering frown. Tears stream from her eyes as she holds herself in the water, desperately trying to wash off the pain that an ex-lover has caused her. She never succeeds because, ultimately, that what breakups do to us. They change the way that we think and make us sulk for a while. This tub is also inside of her mind. She’ll exit it physically, but there’s always going to be some part of her that still sits there and wonders why this had to happen to her.

Steinfeld dropped “Wrong Direction” earlier this month. Since then, fans have gone rampant with speculation that the song is about her ex-partner, Niall Horan, whom she dated for a year. When she announced the premiere of the video on Twitter, she gave her supporters who are going through similar situations a few words of encouragement. ” I know we’ve all been through hard times, just remember you’re not alone,” she wrote.

Check out Steinfeld’s emotional new video up above. 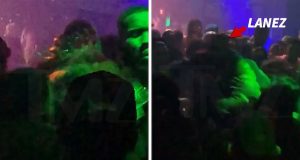