Before she began singing “Without Me” literally on her hands and knees onstage at the 2018 MTV EMA, Halsey revealed that this was her first time singing it live. Not just on television, mind you — first time ever. Knowing that makes everything she did up there even more impressive.

Halsey sang the song, sure, but she did it while chained to a post, enclosed in a glass case (of emotion), and, eventually, drenched in a downpour. It mirrored the video’s depressive intensity, visually capturing the rawness of a song Halsey said she “cried the whole time” while recording.

Though she spent most of the harrowing song trapped in a box, the performance took a very watery turn when the case lifted — as soon as the “Cry Me a River” interpolation hit — and Halsey got soaked by the rain. After the final notes rang out, she sat there on the ground for a moment, collecting herself.

“It’s just me. No wig, no colorful hair, no character,” she said of the song when it premiered in October, “and it’s about my life and about my relationship that the world has watched so closely and so vehemently in the past year and a half.” The video has its own G-Eazy lookalike, but on the EMA stage, it was just Halsey. And she was more than enough.

See the full list of EMA winners here, and catch the entire show at 7 p.m. ET on MTV or stream on MTVEMA.com! 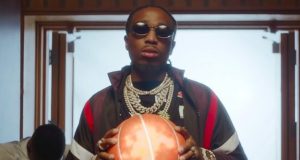 Quavo Turns Into A ‘Monstar’ In His Space Jam-Inspired ‘How Bout...