Last night on Saturday Night Live (November 16), Harry Styles pulled out all the hilarious, soulful, and sugary stops as host, actor, and performer. For the second triple-duty appearance of the season following Chance The Rapper’s hilarious turn in October, Styles commandeered an unforgettable night. It was his first time hosting the show. Hopefully, it won’t be his last.

Styles was in rare form from the get-go. His monologue started with him acknowledging his love and familiarity with the show in a creative way. “It feels like when someone likes you more than as a friend,” he joked. “Me and Saturday Night Live have taken things to the next level.” He then hopped behind a piano to show how “serious” of a musician he was, giving the rest of the monologue from his seat.

Being that One Direction was (and still is, retrospectively) such a big part of Styles’s career, he included some hilarious jokes that poked fun at his bandmates, first teasing that they were there when they actually weren’t. “I love those guys, they’re my brothers,” he said. “Niall, Liam, Louie, and, uh, Ringo,” he joked.”

From there, Styles hopped into the skits headfirst, showing an unprecedented amount of charm. In the musical number, “Joan,”  He played a dog that, thanks to his owner’s imagination, gets transformed into a human. He sings about loving the way that she feeds him garbage and hating when she turns on that scary vacuum cleaner.

In another, “Airline Pilots,” Styles plays one who forgets that the intercom is on. He and a coworker get into an X-rated conversation about Scooby-Doo characters that unsettles the passengers. In what becomes a constant struggle to make the attendees feel better, the two pilots find increasingly wild ways to make everyone uncomfortable.

Another highlight is “Sara Lee” which finds Styles getting reprimanded for accidentally posting some pretty wild, un-businesslike content from the Instagram account of the bread company of the same name. It’s hilarious to see Sara Lee thirsting over Nick Jonas (though we see why). Because of Styles, the company also shoots its shot at random guys and freaks out when it doesn’t get a response, and it also captions its bread selfies with explicit questions at four in the morning. The skit ends with him getting another chance to clean up his act.

Around these skits, Styles gave tv debut performances of “Lights Up” and “Watermelon Sugar” from his forthcoming album The Fine Line.  “Lights Up” was mellow, smooth, and dark. Wearing a shimmering black suit, Styles serenaded the microphone with an awesome vibrato. It was an epic, relaxing, and chilling performance.

“Watermelon Sugar” came next which was a completely new reveal. He cosplayed the fruit’s innards by wearing a bright red suit. The surrounding stage was bathed in a warm pink glow. Styles embraced the feel-good energy of the vibrant, upbeat new record, feeling the groove in his bones as he danced to the roaring guitars and crashing cymbals around him. It was the perfect way to put a cap on the legendary night.

Check out Harry’s performances and skits from his Saturday Night Live appearance up above. 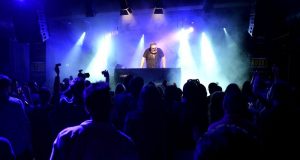 admin - August 23, 2017
0
DJ Kristian Nairn is an imposing figure. At seven feet tall, he could command the stage with his sheer stature alone, but this...