J. Law is getting married! Jennifer Lawrence and Cooke Maroney are engaged, Us Weekly can confirm.

The 28-year-old Oscar winner sparked engagement speculation on Tuesday, February 5, days after she was seen wearing a diamond ring on her finger while out in New York City with the 33-year-old art dealer. Page Six reported at the time that the twosome “seemed like they were celebrating” something at Raoul’s restaurant.

News of Lawrence and Maroney’s relationship broke in June 2018. The pair were subsequently spotted together in Paris and NYC on multiple occasions. In January, a source told Us that the duo were “very serious” about each other.

“They definitely appear to be in it for the long haul,” the source said, noting that the twosome had moved in together.

“Cooke plays very coy when speaking about her to his friends and colleagues,” the source added. “He is clearly smitten about her.”

The Hunger Games actress was previously linked to Nicholas Holt from 2011 to 2014, Chris Martin in 2015 and director Darren Aronofsky from 2016 to 2017. She told previously Marc Maron on his podcast that all of her boyfriends “have been wonderful.”

“I don’t think that you can have any sort of bad relationship with anybody if you’re just blunt,” she said in February 2018. “Everybody always knows how you feel at all times and there’s no lying, it’s just honesty. Everybody’s a good guy to each other. … Every time I go through a breakup, it’s not like my heart isn’t broken. They just never did anything to like, devastate me. They were just good people.” 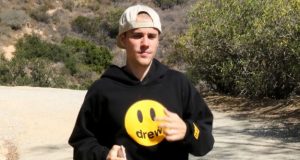 You Can Now Dress Like Justin Bieber With His New Streetwear...