As demonstrators in major cities around the country continue to gather to protest systemic racism and police brutality against the Black community, and to mourn the murders of George Floyd, Ahmaud Arbery, Tony McDade, among countless others, an unlikely group has chimed in to offer its support: K-pop fans are collectively stanning in solidarity with protesters by fighting back against online racism and policing tactics.

By Wednesday morning (June 3), the hashtag #WhiteLivesMatter was trending on Twitter. But instead of the racist comments one would associate with the white supremacist slogan, which was coined in 2015 in opposition to the Black Lives Matter movement’s protests following the killing of Michael Brown at the hands of a Ferguson police officer, the feed was dominated by colorful fan art, cartoonish memes, and joyful clips of South Korean boy bands dancing in perfect harmony. The images and fancams, or short videos of live performances, were overwhelmingly shared with captions denouncing racism and calling out police brutality.

“Queen Lalisa said racists can fuck off!” one post read, featuring a drawing of Lisa, of the popular girl group Blackpink, holding up her middle finger. Another post shared similar messaging in all-caps (“F*CK RACISTS”) while declaring a bias for the industry’s titanic Bangtan boys (“Stan BTS”). This tweet, like many others flooding the platform, also included the rhetorically similar hashtag #AllLivesMatter and the pro-cop #BlueLivesMatter, two other feeds that K-pop stans have since inundated.

The move came in the wake of The Show Must Be Paused, a plea to the music industry by executives Jamila Thomas and Brianna Agyemang to halt regular business operations on Tuesday (June 2) to reflect, bring attention to the issues at hand, and hold their colleagues accountable, which eventually became known as “Blackout Tuesday.” Many people took the opportunity to share black squares on their social media feeds and tagging #BlackLivesMatter in an effort to declare allyship; however, the action effectively flooded a feed filled with actionable items and resources from activists on the ground with dark boxes, only causing further confusion.

As Variety suggested, this inspired K-pop fans to take action, who flipped the effort on its head and turned it into a tactic to intentionally flood racist spaces. Many have since incorporated the hashtag #WhiteoutWednesday.

The mobilization followed an earlier move by K-pop fans to protect protesters in Dallas, Texas. On Sunday (May 31), after a wave of demonstrations in the city over the weekend, the Dallas Police Department asked followers via Twitter to send in “video of illegal activity from the protests” through their iWatch Dallas app. K-pop fans took notice of the initial tweet, per BuzzFeed News, flooding the app with gifs and videos. The following day, the Dallas police tweeted that “due to technical difficulties iWatch Dallas app will be down temporarily.”

The Dallas Police Department’s iWatch Dallas app is now back up and running, according to a statement — but for how long? As one NCT 127 fan seemed to sarcastically remark, “Tragic. Have some Haechan.” 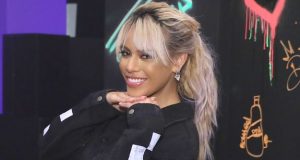 Dinah Jane’s Debut Solo Single Has Not One, But Two Fifth...