Metro Boomin and Gunna are unlike anyone in this world. It’s all in their dress and demeanor. They’re from the Andromeda galaxy, originating on a planet where giant fur coats are normal in warm months and being submerged under water for an album cover is normal business. Their new video for “Space Cadet” lets you know just how they ended up on Earth, although it doesn’t reveal what their missions are. Could they be planning a takeover?

The video starts with where the journey began. A group of alien investigators stare at an old school car that appears earthly, save for two peculiar life forms sprawled across its back. It’s a tense scene involving agents in black with creased eyebrows and shaking lips, holding weapons that they don’t if they will be effective or not, staring at these peacefully sleeping creatures. They wake up and it’s clear that these aliens are Metro Boomin and Gunna who, almost immediately, get interrogated about their purposes. Who are they? Where do they come from? What do they want?

“Space Cadet”‘s visual isn’t worried about answering those questions. We do, however, get a taste of what the two unidentified strangers like to do for fun. They like dancing with lasers and bright white lights zooming around them. Young Thug, a possible alien too, makes a cameo and suddenly becomes more mystifying than normal. Could he have been on an infiltration mission all this time? Eventually, their main interrogator, after studying them, realizes that she can remove her oxygen mask and talk to them freely without fear of contamination, showcasing that maybe these aliens aren’t as different from these earthlings that the humans think they are. Maybe there’s a message in there somewhere.

“Space Cadet” appears on Metro Boomin’s 2018 album Not All Heroes Wear Capes. In a performance of the track on The Tonight Show Starring Jimmy Fallon in February, the producer wore a jacket emblazoned with “FREE 21 SAVAGE” to protest the rapper’s detainment by the U.S. Immigration and Customs Enforcement agency.

Take a look at the sci-fi video up above. Put on your aluminum thinking cap.

Lorde Gives Fans A ‘Delicious’ Update On New Music: ‘It’s Got Its Own Colours Now’ 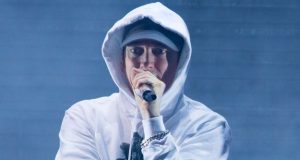 admin - December 27, 2017
0
After ending his four-year album drought with the recently released Revival, Eminem has found himself in a familiar spot: the top of the...