It seems like every day a new series or movie based on a John Green novel is coming to a streaming service.

Recently, we had Looking for Alaska, which is now available to watch on Hulu. Netflix is next up, with an adaptation of Let It Snow: Three Holiday Romances from John Green, Maureen Johnson, and Lauren Miracle. We’re here to tell you that Let It Snow may very well become your new favorite holiday movie.

Why? Well, perhaps it’s best described as (at least for one part of the movie) Sabrina Spellman in a winter wonderland – oh, and a love triangle like the one we’re seeing in Chilling Adventures of Sabrina, at that.

The first trailer doesn’t give everything away, but we know enough to be excited about what’s coming. The footage shows Kiernan Shipka as a character who finds herself caught in a love triangle. Meanwhile, the jolly Jacob Batalon’s character finds him working to host the coolest party Waffle town has ever seen. Honestly, it looks like everyone’s having a blast.

The pair are joined by an all-star cast, including Isabela Merced (Dora and the Lost City of Gold), Shameik Moore (Spider-Man: Into the Spider-Verse), Odeya Rush (Dumplin’), and others.

The movie isn’t scheduled to debut on Netflix until November 8, but that just means you’ve got time still to pick up the book that started it all. This may very well be one of those movies that follows the novel it’s based on closely, and that way you’ll know all the ins and outs for when you inevitably discuss the flick with family and friends around dinner. 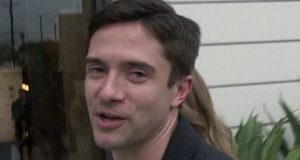 Topher Grace Gets Ominous Call About 'BlacKkKlansman' and Race Relations