With LeBron James’s Space Jam sequel officially a go, he might want to keep Quavo’s number handy in case the flick needs a hip-hop cameo. As the Migos frontman proved on Wednesday (November 21) with the release of his latest solo video, he’s a bonafide Space Jam superfan.

Directed by Kid Studio and Quavo himself, the video for “How Bout That?” recreates some epic scenes from the 1996 classic, a.k.a. Michael Jordan and the Looney Tunes gang’s finest cinematic work. It kicks off with Quavo’s deflated team shuffling into their locker room, only to be offered a bottle of “Quavo’s Secret Stuff.”

You know where it’s going from there: the squad takes back their stolen talents and balls out on the court, as Quavo dunks so hard that he shatters the backboard. After a hilarious press conference by Coach Quavo, the team celebrates their victory by turning the court into a rowdy club. Bonus points if you can spot the rest of Migos making cameos as dunk contest judges.

“How Bout That?” follows up “Bubble Gum” as the latest Quavo Huncho track to get the visual treatment. The rapper’s debut album arrived last month and marked the first of Migos’s solo albums — Takeoff’s The Last Rocket dropped a couple weeks back, and Offset’s own LP is rumored to release in December. Just call them the rap “Monstars.” 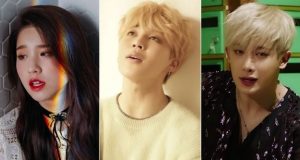 14 K-pop Songs That Will Help You Channel Balanced Libra’s Airy...