Cheyenne decided she wouldn’t tell Cory about Ryder’s hospitalization while he was away competing on The Challenge: The toddler developed a fever and could not hold down food, which can be “really dangerous” because Ry suffers from a genetic condition called VLCAD and her body can go into shock if she doesn’t eat. During tonight’s Teen Mom OG episode, Cory finally learned about his daughter’s ordeal when he returned home from the MTV competition series.

Before the young dad arrived in Los Angeles, Chey had a special request when he got his phone back from production.

“I asked his producers if they could give him a warning and tell him first so that he doesn’t turn his phone on and he’s blindsided,” Chey told her sister R Kyle Lynn.

Even though Cheyenne didn’t directly communicate with Cory, she was speaking to his family, Taylor and Challenge producers — and everyone agreed that since Ryder was stable, he should finish the show with a “clear head.”

When Cory was reunited with Ryder, it was heartwarming — and the two could not have been happier as they shared a big hug and kisses.

“Daddy’s never going to leave for that long again,” he sweetly told her.

After an embrace, Cory revealed his emotional state when he learned about the Ryder’s ordeal.

“Coming off of The Challenge and hearing that your kid is in the hospital was literally my worst nightmare,” he told Chey. “And that’s exactly what happened. Most importantly, I’m just glad that she’s fine now.”

“I didn’t want to call and freak you out and then your whole head would be thinking about Ryder,” Chey responded. “So under different circumstances, if you needed to be here, then of course I would have called.”

Cory complimented his baby mama — and said that he doesn’t tell her “thank you” enough.

“I love doing this whole co-parenting with you — you make it very easy on me, and I appreciate you for that,” he added, while she chimed in that they do a “good job together.”

If you were in Cheyenne’s shoes, would you have made the same decision? Share in the comments — and do not miss Cheyenne and Cory (and Ryder and Taylor!) on the Teen Mom OG season finale on Tuesday at 8/7c. 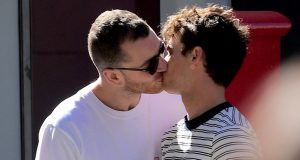