You may not think of the upcoming Pokémon movie Detective Pikachu as an emotional journey, but this latest trailer may change your mind.

“A little shot of wonderful for a weary world,” Pikachu himself (Ryan Reynolds) captioned a tweet with some new footage of the film, which is every bit of relaxing and pure as we need it to be in this hellscape of a world that is 2019.

Set to Louis Armstrong’s “What A Wonderful World,” the latest Detective Pikachu trailer is one of the most peaceful, awe-inspiring pieces of promotional content we’ve seen for the movie just yet.

The camera pans out to show us Charmanders frolicking in the forest, a playful little Squirtle peeking its head out of the water, and then a parade of Bulbasaurs in the forest.

As young Tim Goodman (Justice Smith) makes his way throughout Ryme City, we’re introduced to a wide world of Pokémon who are living their lives alongside people in ways that look far more compassionate than the way we share ours with the animals of Earth. Goodman travels with what looks like a potentially injured or sleeping Pikachu in his arms and we finally see a family of Pancham, a growling Snubbull, and a very tender hug between Pikachu and Psyduck. Pikachu doesn’t seem too into it at first, but he eventually gives in, and your believe us when we say your heart will melt when you see it.

Pikachu and Tim are on a quest to figure out what happened to Tim’s father, Harry Goodman, who’s disappeared following a car crash in Ryme City. Tim’s the only one who can understand the wise-cracking Pikachu, and together they make a strange but formidable pair as they work to unravel the mystery surrounding Harry’s disappearance.

Detective Pikachu will be making its way to theaters on May 17, but in the meantime you can check out our guide to just some of the Pokémon you’ll be seeing when the movie debuts. Spoiler alert: There are a lot! 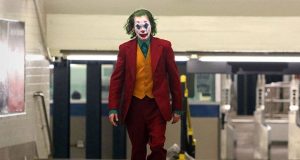 Extras On 'Joker' Movie Locked in Subway Train and Forced to...