Heather and Chandlar are two pregnant members of the Young Moms Club — and the former is having issues with her upcoming baby shower.

In a sneak peek of the Teen Mom: Young Moms Club premiere — airing on Monday at 10/9c — Heather and her mother Raquel discuss the imminent party. But the soon-to-be mother of two is stressed because her parent has not helped prep the event like she said she would.

“I want to make sure everything gets done and it’s not the night before,” Heather states in the clip above.

Raquel, meanwhile, picks up on the cue that her daughter is displeased with the progress so far and explains she will not be doing things at the last minute.

“I just want you to know that things are being taken care of,” she says.

But this statement doesn’t sit well with Heather — and the conversation only worsens when Raquel suggests getting other “people to help.” What makes Heather cry — and does the mother-daughter duo settle its differences? Watch the video to find out, and do not miss the debut of Young Moms Club this Monday at 10/9c (right after a brand-new Teen Mom 2). 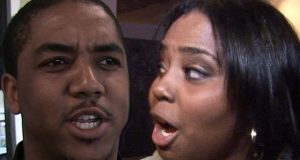