As Chelsea said this week on Teen Mom 2, “A lot has happened in the last six months.” That includes moving to a new house, welcoming a new baby, and having a stranger break into their home — and it all seemed to come to a head this week when Chelsea requested she be rushed to the hospital after a scary incident during which she thought she was dying.

“My heart rate was 150. I couldn’t speak. I literally thought I was having a stroke or something,” she told Cole and the TM2 crew after the incident. “I’ve had anxiety for as long as I could remember, so I thought I knew what an anxiety attack was…I don’t like having issues. I just feel like a crazy person.”

As a result of her hospital stay, Chelsea had to wear a heart monitor for 48 hours to see if the panic attack was caused by stress or an underlying medical condition. But Chelsea’s pal Chelsey, who was the one who took her to the emergency room, seemed to think it was the break-in at her home that triggered it.

“We had been talking about the break-in briefly [beforehand],” she told Chelsea’s dad. “She started feeling funny.”

Said Randy: “I think that whole thing changed her.”

Chelsea agreed and feared that the incident would affect her forever.

“I swear to God, I thought I was dying. I told you guys this was going to mess me up,” she said. “I will never get over it. I feel really anxious right now. I’m nervous. I don’t want it to happen again. I don’t want my life to just be like this now.”

Do you think Chelsea will recover from the incident emotionally? Can her family and friends do anything to improve her mindset? Tell us what you’re thinking, then tune into the Teen Mom 2 finale next Monday at 9/8c. 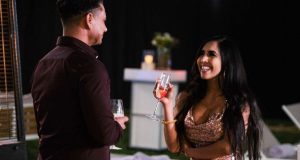 Because First Impressions Matter: Who Made The Best Entrance On Double...